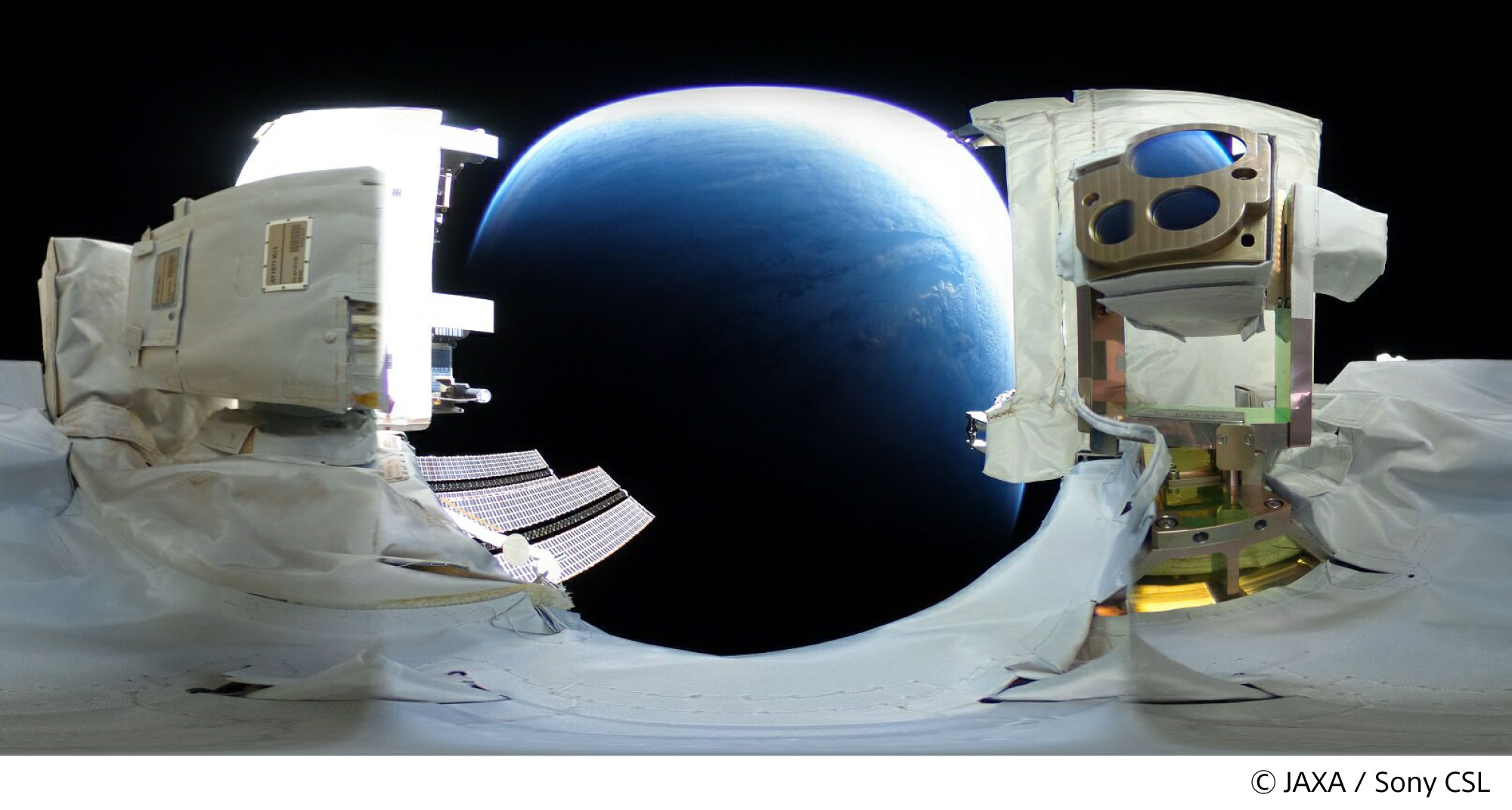 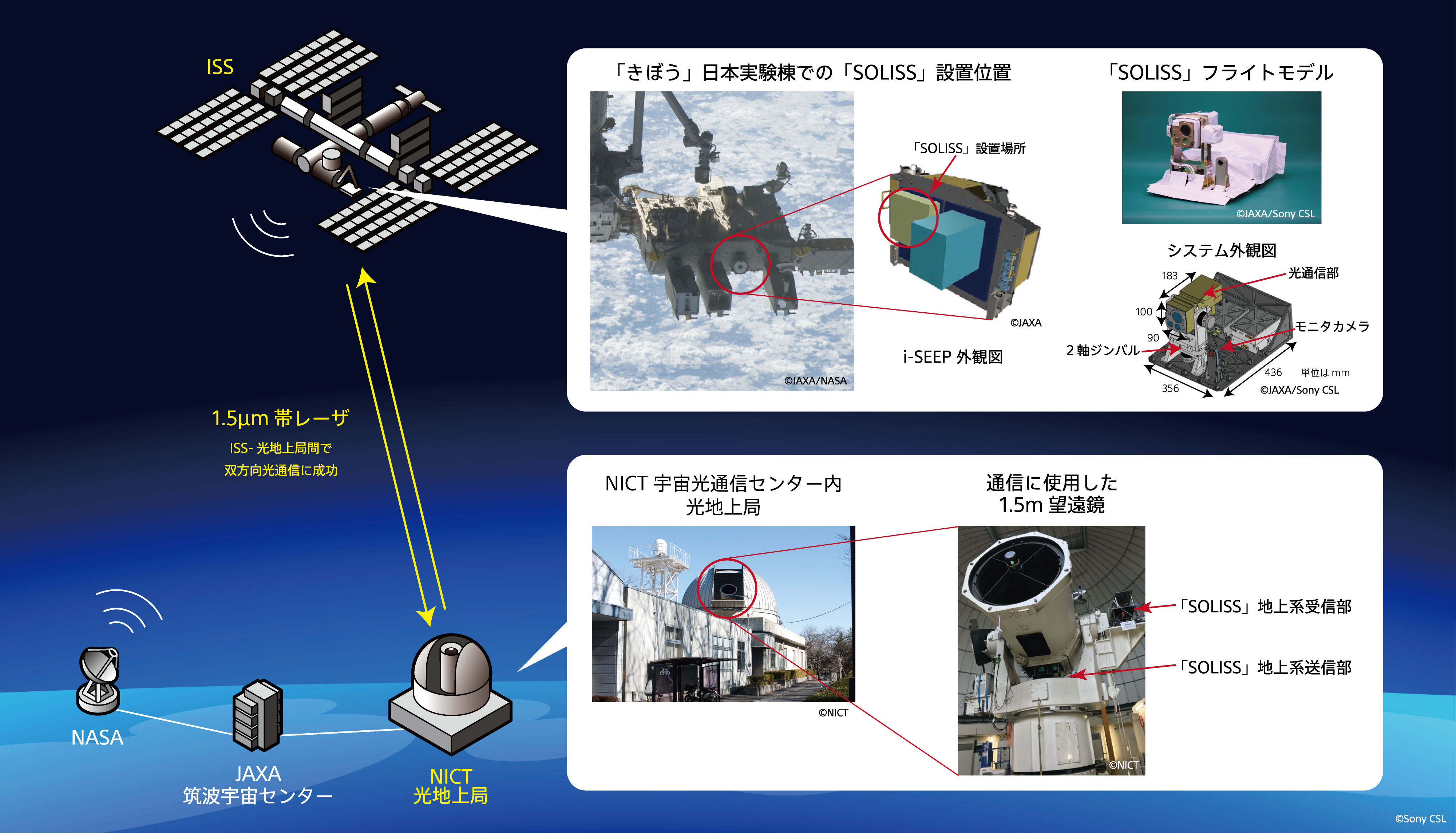 An HD image transmitted from SOLISS via the laser communication

The SOLISS system was installed on the Kibo's exposed facility on the ISS in September 2019. Since then, in order to establish a bidirectional laser communication link between the on-board system and the optical ground station, communication tests have been conducted about once a week, weather permitting, while making adjustments to various parameters.

JAXA sent the SOLISS system to the ISS via the H-II Transfer Vehicle (HTV8) "KOUNOTORI-8" in September 2019 using the Kibo's paid utilization program.*3 The system was attached to the IVA-replaceable Small Exposed Experiment Platform (i-SEEP) hardware adapter installed on the Kibo's exposed facility.

NICT and Sony CSL have been jointly conducting research since 2018 for the purpose of demonstrating bidirectional communication between SOLISS and the optical ground station. NICT provided the knowledge based on the development technology of the optical communication terminal for the on-satellite system, and they jointly carried out the measurements and experiments necessary for SOLISS in-orbit demonstration.

The success of this bidirectional laser communication experiment is the culmination of efforts from the each parties, where Sony CSL conducted communication testing while NICT provided technical support related to experimental operation, and JAXA supported the in-orbit operation of the SOLISS system on i-SEEP.

JAXA, NICT and Sony CSL will proceed in carrying out detailed analysis and evaluation of the experimental results. Futhermore, experimental operation aimed at improving communication stability using SOLISS is planned to continue until early June 2020. 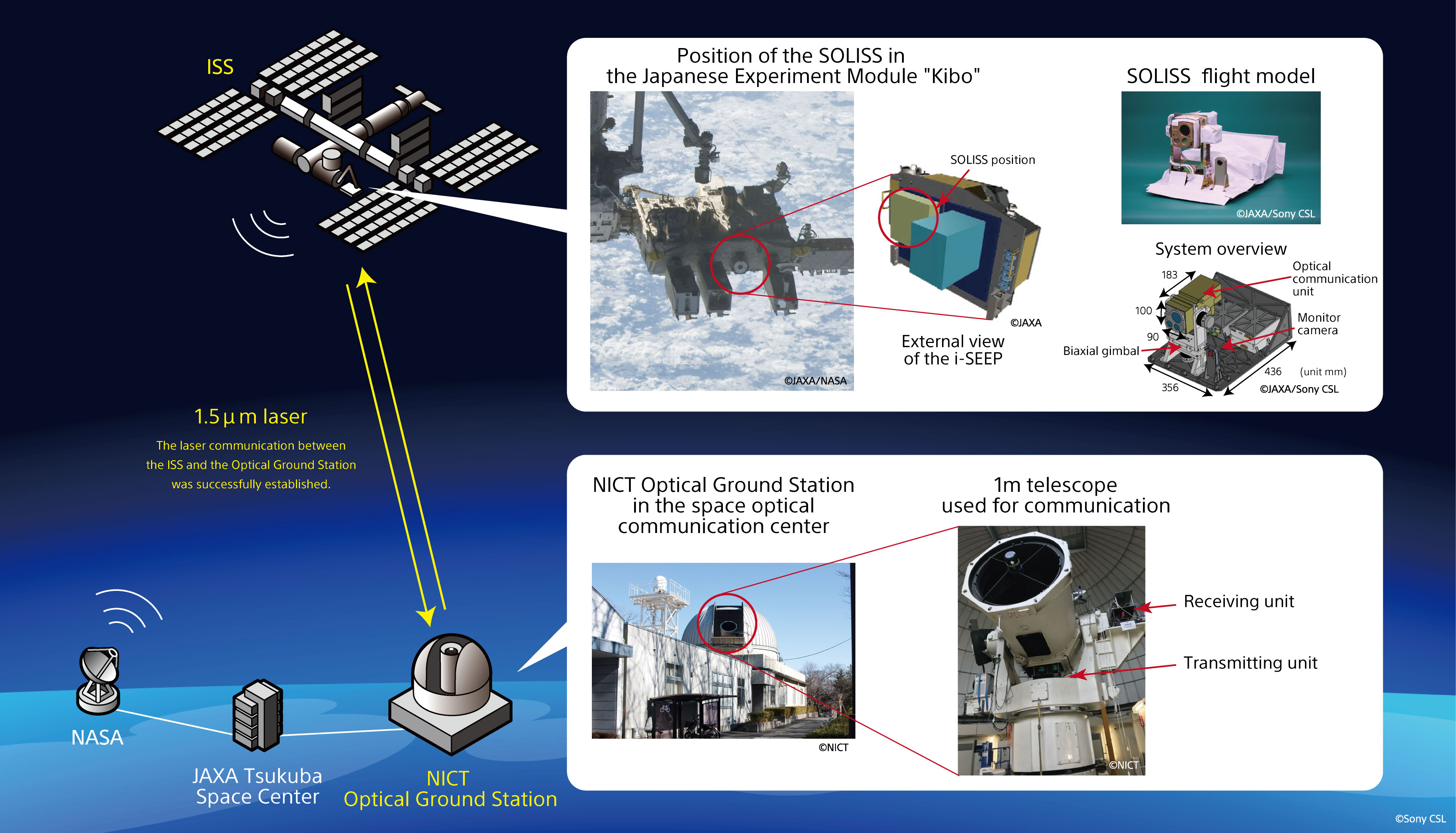 Hiroshi Sasaki, Vice President and Director General for Human Spaceflight Technology Directorate, JAXA, remarked: "The Japanese Experiment Module (JEM) "Kibo" of the International Space Station (ISS) is a permanent experimental facility located in low earth orbit about 400 kilometers above the earth. The maximum utilization of the value of Kibo, which enables long-term verification testing with the support of astronauts, has turned into a meaningful opportunity to expand the use of the ISS for civilian use and technical demonstration, as outlined in the Basic Plan on Space Policy. I am very pleased with the achievement to establish bidirectional laser communication between space and the ground via SOLISS. I anticipate this technology, which originated from our Space Exploration Innovation Hub Center program, will serve as the basis for realizing mass-data communication with orbiting spacecrafts around the earth in future space exploration such as to the Moon and Mars."

Hiroaki Kitano, President of Sony CSL, remarked: "The optical disc technology that Sony has cultivated over the decades controls light at a very short distance of 1 mm or less, but this time it has been proved that this technology can be applied even in long-distance, between space and ground. This technology is not only high precision and low power consumption, but also provides new opportunities due to its small size and mass production technologies. We regard the success of this experiment as an important milestone for future development and commercialization. The research started in 2015 as a part of the JAXA Space Exploration Innovation Hub Center program. With the respective joint research projects with JAXA and NICT, we were able to achieve the successful results this time in a short period of time by using their existing space programs, platforms and equipments that allowed us to implement agile processes in the development of SOLISS."

＊１ NICT Optical Ground Station: A telescope facility installed to develop technology related to space communications. The station has a total of four telescopes with apertures of 1.5m and 1.0m in Koganei, Tokyo, 1.0m in Kashima, Ibaraki, and 1.0m in Onna, Kunigami-gun, Okinawa.

＊２ Studies implemented based on the JAXA-Sony agreement concluded in 2016 for conducting fundamental and feasibility studies on long-distance communication system with free-space laser link technologies as part of JAXA's "Open Innovation Hub for Expanding Humanosphere and the Domain of Human Activity through Solar System Frontier Development," a project commissioned by the Japan Science and Technology Agency (JST) under its innovation hub start-up support program.

＊３ The Kibo's paid utilization program of JAXA to enable mainly for private companies in Japan to use Kibo on their initiatives in order to meet the needs of scientific research and technological development and to benefit form an exclusive right to use the result of their initiatives.